Morrissey exclusive: "Most pop artists would sell their blood for a price."

Just days before his arrival in Greece, Morrissey answers the questions asked by Greek fans: 5 musicians, 4 journalists, 2 radio producers and one blogger. 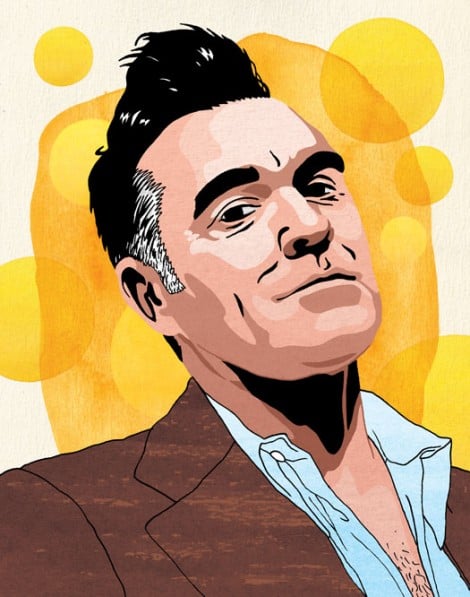 One great greek poet – Odysseas Elitis - writes. " I found the life I had lost, in the eyes of a calf looking at me in devotion". Have you ever lost and found yours? And when/where did that happened? (Dear Quentin, DJ).

---Of course!  When an audience of thousands reaches forward it makes up for that one ever-absent romance that life just cannot provide under ANY circumstances.

Paul Morley has written about you: "in many ways he is the sanest man on the planet, but the cost of maintaining this sanity has been a kind of insanity". So what is the most insane thing you've done throughout your career to maintain your sanity? (Theodosis Michos, journalist).

---The most insane thing I do is never to bask in attainments.  This is wrong, I know, because if you achieve then you should allow yourself to enjoy, but  I greet each day as if nothing has ever happened for the good.  It keeps me level, but it’s obviously insane. I don’t put this answer forward as a matter of logic.  It isn’t.

Morrissey of 2012 met with Steven Morrissey of, let's say, 1977, do you think that they would be fond of each other? What would they say to each other? (Theodosis Michos, journalist).

After all these years, what makes you hop out of your bed in the morning? The bills? A warm smile? Your everyday routine? Please prioritize what matters to you: love and bliss or career and keeping your brand-name alive and kicking? Success or happiness? (Markος Fraggos, journalist).

---I find it difficult to get out of bed, or to think of why I should.  It takes an industrial crane to lift me up.  Thankfully there’s usually one lying around.  It isn’t laziness, just melancholia.  I miss 1752.

Steven Wells wrote that “ Morrissey is the man who more or less invented indie”. What do you thing about that? (Fotis Vallatos, journalist).

---Ah, so he DID once say something civil.  There was a crucial point where REM were trotting behind the Smiths, and doing a quite passable imitation of the Smiths, and the head of Warner in the US said to me: “it’s just a question of time before one of you break big”.  The next REM album broke them massively, and the Smiths broke up massively.  I have a very independent spirit, and always have.  Most pop artists would sell their blood for a price.

If “sorry doesn’t help”, then what helps? Is there a solution for the problem of co-existence? (Markος Fraggos, journalist).

monks argue, and cannibalism is still very popular.  Rightly so.

The passing of time... How has it affected you - and your lyrics?  (George Kokonidis, blogger of “POP!” on LIFO.gr).

---It hasn’t.  I still have the compulsion to write about whatever befalls me.  It’s the absence of a kindred spirit to whom you “can’t wait to tell.”   I am my best friend.  One’s company, two’s a crowd.  Whenever I hear of someone getting married I have the urge to send a wreath.

Which are the things (music, books, movies etc.) that you keep returning to them when you want to feel strong? (Fotis Vallatos, journalist).

---They all run at the same pace.  I buy hundreds of DVD films every year, and try to log as much as I can.  Books are far too fragile to buy randomly.  Music is difficult because, as I repeatedly said in 1992, we have reached the stage where too many people are making music – and too easily.  Consequently music has suffered and no longer has any mystique.  But music was the thing that saved me and made me, and to give up on music is to die.

Have you ever felt like quitting the music industry because of the fans' and the music critics' negative reception towards one of your records? What really helped you going on? (Thodoris Sourvinos, musician, Wise Lines).

----I lost sight of good reviews about ten years ago.  I don’t look any more.  What’s the point?  Yesterday Radio City Music Hall in New York sold out in just over an hour.  So there’s your answer.  One review is one view.

Now, in such days of political, economical and, most importantly, spiritual recession what is the message that Morrissey wants to bring to the people? (Yannis Papaioannou / ION, musician, journalist).

---I would like people to remember that they have so much power to change anything politically that they don’t like.  The Middle East has been such an uplifting example for all of us.  If you don’t like the government, get rid of them.  If you don’t like so-called royalty, get rid of them.  I’m not an anarchist, but the only extremism I ever see comes from politicians and royalists.  People must remember that, combined, they are stronger than any army.  The notion of Princes and Queens belongs to the Stone Age.  The world belongs to the people now.  I can’t think of a President who did not prove to be corrupt, or a murderer.  Politics must change.  Peaceful demonstration, alas, is not allowed to work.

If you were given the power to brush something off this planet, what or who would you choose it to be and why?  (Yannis Papaioannou / ION, musician, journalist).

---I would get rid of the abattoir (slaughterhouse), which I consider to be a symbol of human evil.  They are no different to the gas chambers of Auschwitz.  Why are they tolerated?

and stops me.  It urges me to remember something from long ago, a certain irresponsibility …. days of friends without foes.

You recently said that you are planning to retire on 2014? Which are your plans for the rest of your life? (any places in the world that you would like to move for some time?) (Fotis Vallatos, journalist).

---I like Lake Geneva.  There’s always a very distant church bell ringing somewhere, and a purity and wisdom to the landscape. I don’t want to be over-informed.  I don’t want 24-hour news and a welter of new gadgets.  I’ve never possessed a mobile cell phone and I never shall.  I don’t want to see a McDonald’s, and I don’t want to hear about celebrities or the British so-called royals.  Even logging on to the AOL News page is torture …. Gwyneth Paltrow in see-through dress!!  Kate Middleton wears funny hat!!!!  Prince Harry pulls funny face!!!!  Jesus … it’s moronic…. The revenge of the puppets.  No thanks.

When you are singing your old songs,  do you feel that their lyrics have transformed into something different or they keep tripping you back in those times? (Κτιρια τη Νύχτα, musician)

---There are some that I can’t sing because I’m now 53 and the songs were written as very young angst.  Mostly, though, the message remains, and they still register because the world is suffering more than ever, yet there are no songs about social awareness anywhere.  Dumbness is always assumed to be more valuable in the pop market, and anyone such as myself who attempts to say something intelligent is given a very hard time.

The press is abnormally vicious to anyone who dares.

Are there any covers of your songs that you like? If yes, which are  these elements that you want to listen to a cover song?  (Κτιρια τη Νύχτα, musician)

---I love so many of them … Nancy Sinatra ‘Let Me Kiss You’, The Pretenders “Everyday is like Sunday’, t.A.T.u ‘How Soon is Now?’, Marianne Faithful ‘Dear God, Please Help Me’, David Bowie ‘I Know It’s Gonna Happen Someday’, Jeff Buckley ‘I Know It’s Over,’  The Eurythmics  ‘Last Night I dreamt That Somebody Loved Me’….  Oh, such great thrills for me.

Why do you dislike morrissey-solo.com? (Dear Quentin, DJ)

---I dislike the fact that my name is used when it’s so obviously a Smiths site and not a Morrissey site.  It also relishes the negative and even seeks it out, which has upset most people that I know. Consequently it has become a vehicle for Morrissey-haters, and no one I know will log on to it any more.  The owner says it is an open forum, but since everyone posts under the name Anon, then how can that be considered open? The owner of the site apparently approached my ex-manager last year saying he would stop all negative stories if I paid him $3,000 per month!  I think that just about sums it up.

If you had the chance to erase a couple of tracks from your back catalogue which tracks would you choose and why? (Thodoris Sourvinos, musician, Wise Lines).

---I struggle with the Kill Uncle period because the songs were written onto music from Mark Nevin, whom I never actually knew.  And it shows!

When does your autobiography gets published? Tell us something about it..  (Laternative, radio producers, journalists).

---It is published in 2013 in nineteen different languages. Except English.

You have lived in Rome and Los Angeles. Are they better places to live than England? Why’s that? (Fotis Vallatos, journalist).

---Because the British royal family are not there.

When was the first time you decided that lyrics and singing is going to be your main form of expression? (Sillyboy, musician).

---When I was six.  I never wanted to be a musician.  I would sing so loudly as a child that the neighbors complained.  I could see their point.

Do you ever think back at your early appearances and share the same feelings when you are on stage now? (Sillyboy, musician).

---No.  The physicality is completely different.  It couldn’t be MORE different, in fact.

Is music business just like any other business? (My Wet Calvin, band)

---It’s far worse.  Complaining about it doesn’t work, though, because the music business is at the core of everything that saved me, so you must accept how it works and just get on with it.  I understand, though, why groups break up and why people turn to heroin and why some kill themselves.  It’s about as vicious as you can get.  If you can get hold of the money that you earn then it’s a miracle.

What would you do the days that you are gonna stay in Athens? (Fotis Vallatos, journalist).

--- I will be seen in the most unlikely places doing the silliest things. If there are homeless cats to feed, then that’s where you’ll find me.