An article published by Spiegel and Deutsche Welle puts Greece in the 15th place among the European countries where citizens are safer against the coronavirus, whereas Germany is placed 1st. Which criteria were taken into account and, mostly, who is responsible for that research?

VASSILIKI SIOUTI
At first glance, some reasonable questions arise. How is it possible that Germany, which has a higher percentage of deaths per million inhabitants than Greece, is thirty places higher than Greece?
-
0
•••
-
0
SHARES
-
ΣΧΟΛΙΑΣΤΕ

"In which countries are citizens safer against the coronavirus" asks Deutsche Welle in a recent post, to give the answer: "Germany is the safest country in Europe", citing the research of a "Deep Knowledge Group", which places Germany in first place and Greece in 15th, lower than the Netherlands that surpasses 3,000 deaths and Belgium with close to 2,500.

In many other cases, perhaps no one would be surprised to read a survey that puts Greece in last place. However in dealing with the coronavirus, Greece has done quite well so far, with better results compared to many European countries, even Germany. This is the reason why so many Greeks who were in other European countries were trying to find ways to return to Greece, where they felt safer.

In many other cases, perhaps no one would be surprised to read a survey that puts Greece in last place. However in dealing with the coronavirus, Greece has done quite well so far, with better results compared to many European countries, even Germany.

The article in Deutsche Welle cites as a source an "exclusive report by Spiegel" that publishes the research of a "think tank", which claims that "Germany is the safest country in Europe during this time of the coronavirus and the second safest country in the world" after Israel. In this metric Greece falls to 30th place.

At first glance, some reasonable questions arise. How is it possible that Germany, which has a higher percentage of deaths per million inhabitants than Greece, is thirty places higher than Greece?

"Doesn't Germany have more deaths than Greece as a percentage on the population?", we asked the author of the article in Deutsche Welle, who replied: "Yes. But the research takes into account other criteria, such as hospital beds, where Greece is clearly lagging behind". Indeed, but isn't this a greater success, when with so few means, after a 10-year crisis and memoranda imposed on it that reduced health spending, it managed to have fewer deaths than the mighty Germany?

You can see the criteria that claim to have formed this result: "In their research, think tank analysts took into account many different metrics, such as the validity of restrictive measures, the number of violations, the scope of the travel ban, the mass of diagnostic tests and the availability of hospital beds". No reference to human lives. Strange way of measuring, to be honest.

"Compared with other countries in Europe, Germany has the best ranking for safety and stability while globally located in the top positions in the management of the crisis," says co-founder of DKG, Dmitry Kaminski, as Deutsche Welle and Spiegel inform us.

On social media, there were many who rushed to reproduce the article, such as SYRIZA MEP Dimitris Papadimoulis. Of course, the news were also reproduced by the Greek media, since the source was the well-respected magazine Spiegel.

But who is Mr. Kaminski and the so-called think tank that claims to have done the research, even though it is largely unknown in the field of public opinion research?

According to its official website, the "Deep Knowledge Group" is a fund founded by Russian Dimitri Kaminski, who appears in numerous publications as an expert on longevity. Besides, the fund's website also mentions that it is active in the field of longevity.

Deep Knowledge Group's portfolio, according to the company itself, includes an "interplanetary" company, which is described as a "Silicon Valley-based space development company that aims to make the global space sector more accessible and attractive". Part of the activities of "interplanetary" is, always according to their claims, ...SPOCK (Space Program Ontologically Computed Knowledge).

In an older Forbes post it is reported that Dmitry Kaminski, in the summer of 2017, was a "longevity expert, co-founder and managing director at fund Deep Knowledge Ventures based in Hong Kong", which "has supported leading companies with a focus on longevity, like Insilico Medicine". Kaminski has also announced a "$ 1 million prize to anyone who breaks the longevity record", which is 122.5 years. 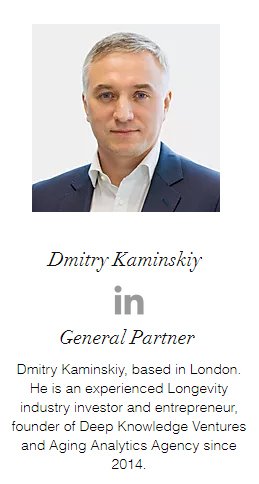 On April 8, in the Times of Israel, journalist Simona Weinglass wrote that while the police are chasing citizens that spread fake news about the virus, the Prime Minister of the country, Benjamin Netanyahu himself, posted misleading posts on his Facebook account.

According to the report Benjamin Netanyahu posted on his Facebook page that Israel is at the forefront of the fight against the coronavirus. He even published a chart that showed that last week, Israel had conducted the most tests per million people in any country in the world.

What he did not say, however, according to the Times of Israel, was that the chart he posted concerned a specific time. If the previous weeks had been included in the calculation, Israel would have been behind many other countries.

A few days earlier, on March 31, Netanyahu posted another research on his Facebook page, as well as on the prime minister's official page, where he included a chart entitled "Classification of Safe Countries for the Coronavirus" where Israel is first among the countries in the world where one would feel safe in terms of the epidemic. The only problem: the source of the graph -says the post- which once again "comes from the website of a company called Deep Knowledge Group, about which few had heard anything".

"What is the Deep Knowledge Group?" Israeli journalist Neri Zilber asked on April 2, but no-one seemed to know.

This is one Netanyahu referenced: https://t.co/HPJf5idrYt

-Methodology not explained at all
-Point/ranking score unclear (what does 619 actually mean?)
-Israel (as Bibi told public) ahead of Singapore, Hong Kong, Taiwan
-But *Palestine* ahead of Luxembourg, Canada & SOUTH KOREA

Reporter Simona Weinglass discovered that the Deep Knowledge Group is a company "of Hong Kong", which belongs to a businessman based in Moscow, Dmitry Kaminski, dealing with "longevity companies". In fact, DKG seems to operate in many countries, with London reported in its website as its base of operations.

Simona Weinglass also reported that in a 2016 article in the Russian economic newspaper Kommersant, Kaminsky was referred to as an investor, "in Russia's growing longevity industry, which seeks to delay or reverse the effects of human aging".

"Many have criticized Benjamin Netanyahu's post, questioning how Israel could be considered the 'safest' country in the world when it already had more than 5,000 cases of corona on March 31, higher than in many other countries at the time. The website did not explain its methodology. They simply said that "the data is collected from sources available to the public, such as the World Organization Health, Johns Hopkins University [sic], King's College London, CDC", adding that they do not take responsibility for the accuracy of the diagram.

The post by the Israeli prime minister was reproduced as a fact by dozens of Israeli news websites without any verification of the claims.

Thank you @derspiegel for such a great article about @DeepTech_VC COVID-19 Rankings. https://t.co/PKTyDsLwJv

When asked for his opinion Nir Grinberg, professor of information systems at the Ben-Gurion University of the Negev, says that "the Internet makes us uniquely sensitive to consumption and dissemination of fake news, because we cannot always know the source of the information we receive". "This is a very big problem during the corona period", the professor told The Times of Israel, speaking from his home in Tel Aviv, "because when you act on the wrong information, it can potentially have life or death consequences". "In an ideal world", Grinberg said, "any consumer will really check every claim they hear or read, but there's obviously no time to do that. So we usually assume that if the information comes from a reliable source, it's true".

In addition to the research appearing in Spiegel, which presents it as an exclusive, the same research has been published in Forbes on 13/4/20, entitled "Deep Analysis Of Global Pandemic Data Reveals Important Insights". In Forbes the byline is not that of a journalist but of Margaretta Colangelo, co-founder & Managing Partner at Deep Knowledge Group, the entity that produced the report in the first place.

In this article in Forbes, there is a reference to the methodology of research but it amounts to a mere juxtaposition of a series of factors, without any reference to their specific impact or means of calculating any of them. Some, in fact, remain secret and are only transparent to DGK.

Most of the companies of the Deep Knowledge Group seem to have been founded by a Romanian, mentioned in company documents as DMITRI CAMINSCHII.

Searching for the group in Opencorporates, it is revealed that Deep Knowledge Analytics was founded by Romanian DMITRII CAMINSCHII with an initial capital of 100 pounds (100 shares of one pound) (pdf) and a founding date of 25 May 2018.

The headquarters of the company, 85 Portland Street, First Floor, London, England, W1W 7LT, coincide with one of the addresses used by The London Office, which provides virtual office services.

Mr. Kaminski, referred to by Spiegel as a data specialist who confirms the effectiveness of Germany's actions against the COVID19 epidemic, appears in other publications' posts, as a Romanian founder of gerontology companies, as Moldovan, sometimes a billionaire, as an oligarch from Moldova who was born in Russia or as a Russian billionaire. In 2014, another of his companies, Deep Knowledge Ventures, claimed to have an artificial intelligence algorithm (Vital - Validating Investment Tool for Advancing Life Sciences) as a member of its board of directors. The algorithm was developed by another company Kaminski seems to have founded, Aging Analytics. Noel Sharkey, one of the world's leaders in artificial intelligence, called the whole thing out as publicity hype.

THE ARTICLE IN GREEK